"I choose to create my work with materials that once served a function before being discarded. Scrap metal, retired tools, mechanical salvage and every day items are recognisable within the artworks but have been manipulated, repurposed," 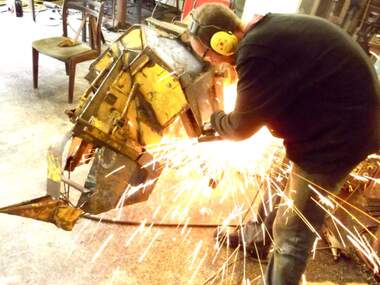 WORK
Alan Williams is an artist and sculptor working predominantly with old, used, and scrap metal components to create fantastical animals, beasts and creatures. His methods for working these materials are rooted in the ancient traditions of blacksmithing, which is where his previous training lies.

INSTALLATIONS
This has enabled him to develop his artistry to high capabilities and to create a visual richness in his work that is difficult to compare.He has created permanent artworks for exclusive clients,galleries,hotels, botanical gardens and public spaces. There is a permanent installation of a Greenfinch (pictured) in Shaheed Park in Kuwait City, along with numerous public art projects in the UK. Alan’s pieces are bought and commissioned from all over the world, from a Blue Marlin for a sea life center in South Korea, to a lion headed sceptre for an African king.

JOURNEY
Alan has embarked upon many interesting projects in his short career of just 13 years(7 of which he was mostly a blacksmith and fabricator). He always kept his love and passion for his artwork going alongside his more day job activities, though eventually he became a full time artist in 2011.

For over 28 years Alan has maintained his own metal workshop where he constructs his artistic creations. Based in Brighton, UK, he has expanded from a small shared space, to presently renting a large self contained space, which has allowed him to construct pieces of considerable size. From simple beginnings he has expanded his work tools so that each piece is primally forged within his working space.